The Public Missiles Limited Bull Dog kit is the first high-power kit I built. This is a not a scale model of the famous "Bullpup" U.S. air-to-surface missile, but is reminiscent of it.

"I'm already getting ahead of myself here. I haven't flown any rockets in probably 20 years and I'm already building a "level 2 rocket," which as far as I can tell, I can't even fly in this area. Oh well, building them is most of the fun and this is certainly an impressive rocket. At 6' 4", it's taller than I am!

This was my first high-power rocket. Before that, I'd only built two model rockets (Quest Intruder and Estes Black Brant II) and two mid-power rockets (Aerotech IQSY Tomahawk and Loc/Precision Stovi). This was a good kit to start with since the instructions were well-organized and complete. But, it's a pretty big jump for "G" to "K" motors. 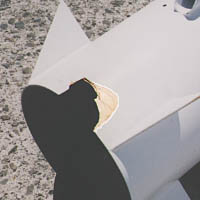 By the time I'd flown it (in June), I was very happy with the rocket. I love the way it came out. I really took the time to build it right and finish it nicely. (See my construction notes in the kit section below.) Too bad the P.M.L. phenolic body tubing is so brittle as the rocket took damage on its first flight. The damage was repairable, but not at the flying field.

You can see that a chunk is missing. (I don't know if this was zipper or impact damage on landing.) I was able to replace the missing body tube area with fiberglass, which was a bit of an adventure by itself. See my repair job, which came out nicely. After the repair, the rocket flew again on a K1100!

On June 13, at the annual ROC-stock launch in Lucerne, California hosted by the Rocketry Organization of California (ROC), the Bull Dog flew for the first time. It was recovered with only minor damage after a beautiful and spectacular flight on a K550, a definite crowd-pleaser.

On October 10, again at a ROC launch, I launched the Bull Dog a second time. (After the repair was completed.) This time, I sent it up on a K1100 which shot this 11lb. rocket right into the air:

The rocket performed flawlessly (a K1100 isn't too much motor). The parachute never fully inflated and the rocket came with with a "parachute wad." This 11lb. rocket fell from several thousand feet with only a lousy "streamer," punched a fin into the dirt, and was fine!

The Bulldog flew for the last time at ROC-Stock VIII on a Rocket Dyne Systems K500 (full K). For those who haven't seen the Rocket Dyne systems motors, they are a sight to behold. The picture below was taken with a 50mm lens (yes, I was up close)! At 50 feet, the sound of the motor hurt my ears. Unfortunately, the P.M.L. elastic strap broke at one of the quick links and the nose, the parachute and the body of the rocket separated at ejection.

The instructions for this kit were simple, but clear. Nothing too unusual for a high-power rocket kit (I say in hindsight). Like all larger P.M.L. kits, the body tube is phenolic, the nose cone is molded fiberglass and the fins are G-10 fiberglass. Good solid construction throughout. If you build this one correctly, you won't get a shred, even on a large motor. Below are kit details and construction notes.

The fins actually mount through the boat tail to the motor mount tube. You epoxy the rear centering ring and MMT into the boat tail, but leave the forward centering ring loose. The fins are G-10 and are a standard through-the-wall mount. I used 1/8" wood dowel and a liberal amount of epoxy as the fillets after the fins were mounted since you could get access from the forward end of the boat tail. You could also probably pour fin fillets although access is very tight in the tail.

The rocket required a pound of nose weight be added for stability. The CP of this rocket is 58 inches from the nose tip (according to P.M.L.) and I wanted to get the CG forward of that by at least 1 1/2 times the 6" diameter because of the canards in front. I bought #7 1/2 shot and mixed up a pound with a couple of ounces of epoxy and poured it into the nose cone. I then backed that up with spray-in insulating foam. This seems to be the right weight. The rocket took off without any weathercocking and flew very straight.

The biggest way to get a nice finish is hard work. (Calvinism lives!) I can never fill those P.M.L. body tube seams in one pass. The first mostly fills them up, but leaves visible lines. I use lots of Elmers Fill 'n Finish for the first pass since it sticks well to the bare phenolic and fills quickly. Then, I'll prime to see find the uneven spots (there are usually lots). After the primer, I'll use a standard hobby white paste filler such as "Micro Fill." Two or three fill/sand/prime iterations later, I'll be ready for finish paint.

Masking is a real trick too. Masking tape doesn't work well for me. I haven't had good luck with hobby masking films or tapes either, but ordinary clear tape (3M Scotch Transparent or Magic tape) gives razor sharp lines. Unfortunately, clear tape is very high tack and will pull paint off blow-molded nose cones and sometimes paint-over-paint (yes, even Krylon). Second to clear tape is "Pactra Masking Tape," which is lower tack and produces good lines (and is what I used on the Bull Dog). I had to touch up some paint which bled under the tape by hand. If you look closely, you can see the touch-ups are not as flat as the sprayed colors, but you'd never see it in a photo (see close-up below).

I got the paint scheme from the Estes Bull Pup 12D kit (see the kit cover below). Even though this isn't really a model of a Bull Pup, it looks enough like it that I wanted to use a real Bull Pup color scheme. (Since then, I discovered Bill Rossi's BULLPUP PAGE which has lots of photos and some drawings.) I was able to produce nice decals for the lettering using Detail Master decal paper (from Scale Sports) printed on the Alps MD1000 printer. I was pleased with how the decals came out. Obviously since this isn't particularly scale, I took liberties with the text on the decals (no AGM-12X ever existed).

My first try was using a laser printer, but the toner didn't really stick so it flaked off as I tried to apply the decal. Also, Krylon clear coating made the toner bleed. I had just about given up, when I thought I would give the Alps MD1000 printer a try since someone had posted an article about how this worked well for decals. It really does! The Detail Master decal paper is very fine and melts nicely with decal set. The paper also is very strong for its thickness so I was able to position the large decals for this project without tearing them. For reference, the block of text below fills a 8 1/2 by 11" sheet:

Below is the front of the Estes Kit box. Talk about a nth-hand way to get your prototype data!

The rocket uses the P.M.L. "piston ejection system," in which the ejection charge pushes a plunger up the body tube, shoving anything inside violently out. The nose and parachute attach to the plunger which is attached to the motor mount tube. (This rocket would not be easy to modify for electronic recovery after being built.) Once caution P.M.L. makes is that you should reduce the amount of ejection charge because the piston ejection system requires less (you just have to pressurize the area behind the piston to get it moving and keep it moving). I forgot to reduce the ejection charge when I built the motor (I just filled up the well of the Dr. Rockets forward closure) and had no ill effects.

P.M.L. phenolic body tubing is very strong and stiff, with great strength along the long axis. However, it is also very brittle and breaks easily on impact. My Bull Dog came down normally, under its parachute, and landed on the Lucerne dry lake bed which is dusty packed dirt. This was enough to break a nice chunk out of the forward end of the tube, presumably where the rocket hit as it landed. 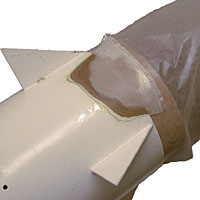 To patch the hole, I broke of the loosely connected pieces and loose flakes of phenolic. Then I sanded a smooth transition around the break. To fill the tube thickness, I used two layers of 9oz. cloth cut to match progressively the size of the tapered hole and a final layer of 2oz. cloth as a veil. This makes a thick and very strong replacement surface.

To make sure the right shape was maintained, I left the piston (of the P.M.L. piston ejection system) in the front of the tube and covered it with wax paper. The wax paper prevents the epoxy from bonding and gives a little slide room for the piston in the repaired airframe. 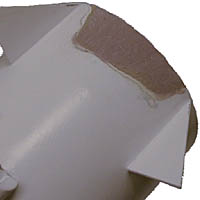 Despite three layers of cloth, the patched section still ended up being slightly thinner than the phenolic tube thickness. I smoothed this difference out using West System epoxy thickened with 407 "low-density fairing filler." This is close to the ideal application for this product, which is meant to smooth large flat fiberglassed areas in boat building. 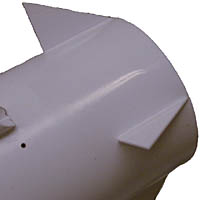 I thickened the mixture to "peanut butter" consistency and generously spread it into all the low areas. You don't need to be too careful about getting extra mixture on the joint since it sands very nicely.

Once primed and painted, you'd have to look closely to see there was ever a repair at all! The gloss white paint shows any irregularities. You have to look and feel very carefully after priming. (You can see where the new paint is a little shinier than the old, even though they're both Krylon "Glossy White." I'm not sure why.)