Tom Rouse, Dave Hall, Tom Tessier and myself went out Churchill, Manitoba in September 1999 to scout out the Candadian Space Agency launch site there. We were toying with the idea of CATS prize attempt for late November 1999 and were working out the details of our application for a launch permit at this Canadian site.

Churchill was the site of many Black Brant launches and where much atmospheric exploration was done. The range has three launch pads and two large preparation areas, all enclosed from the arctic conditions. The site is now owned by the Province of Manitoba, maintained with the cooperation of the Churchill Northern Studies Centre. In addition, the town of Churchill is a tourist spot for whale watching and spotting polar bears. Below you can see an overhead view of the range as it is today.

Our tour starts with the block house. All three pads are controlled from this building. The blockhouse is connected to pads 1 and 7 through a network of covered passageways to keep out the elements. 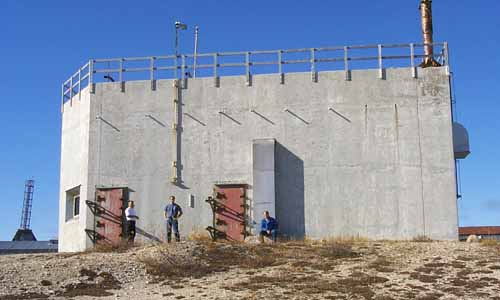 Not only to keep out the elements, the block house is built like a fort to keep out wayward rockets as well.

Here are the firing consoles we will use to launch our rockets. These things look like they came straight out of a sci-fi movie! Gotta love that 50s technology. Snide comments aside, this stuff is still in working condition.

A look out the window in the block house towards pad 1. Pad 1 itself is hidden by the covered passageway, but you can see pad 7 on the left. At any rate, you don't get much of a view from inside the block house. 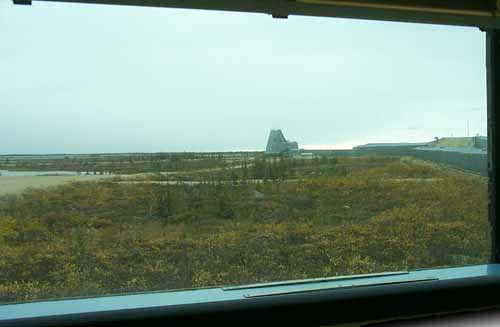 For all the joking about the 50s, they knew how to build things well back then. Note the care taken with a wiring cabinet. (This cabinet held wires from the block house to the pads, used for directly-connected instructions and control.)
Who knows why the two left-over missiles on the right were parked in the block house...

There are several preparation areas connected to pad 1 by the covered passageways seen in earlier pictures. Below you can see the room where the Black Brants were prepared for flight. They were stacked in rows here at one time and this must have been a scene of intense activity when eight rockets were being prepared at once. We will use this space to prepare our rockets for flight as well. 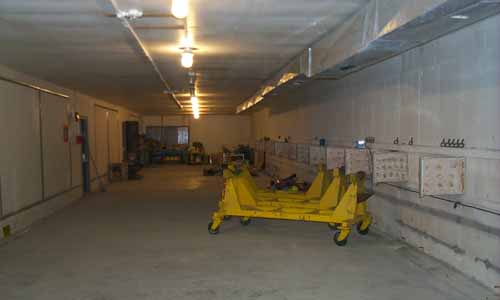 A nice bit of history left in the passageway: A box from a Black Brant motor (unfortunately without the motor itself).

Most of our time was spent at pad 1 since this is the pad we will be launching from. Pad 1 (the "Universal Launcher") is a large rail which can be raised and rotated to provide a wide range of launch angles and directions. In the picture below you can see Dave Hall, Tom Tessier and Tom Rouse.

Here is a close-up of the rail left over from a Black Brant launch. We will build a secondary rail to attach to this rail to hold our rockets at the right location.

To keep the rocket warm until actual launch time, a shroud covers the upper stage (or stages). This shroud opens via remote control when the rocket is raised into launch position. A furnace pumps hot air into the shroud while closed. In the second picture at the lower right, you can see Jack Ireland of the Canadian Launch Safety Office of Transport Canada. 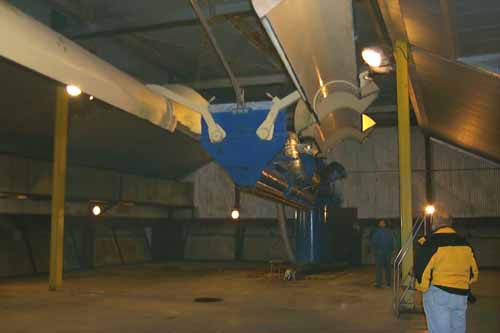 Below is a picture inside the shroud and you can see Tom Tessier and Jack Ireland smiling back at me.

Below is a better shot of the rail, this time with the roof doors partly open. 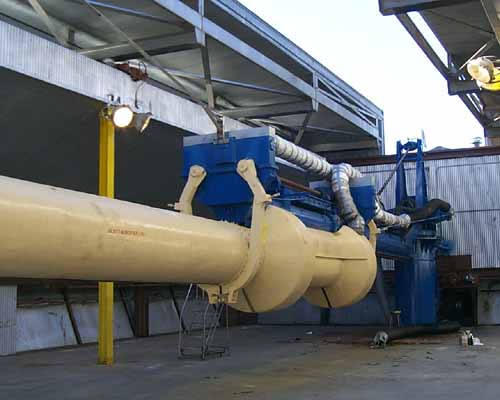 And finally a shot of the rail raised, with the shroud open in firing position. These pictures were taken on an unusally nice September afternoon. Imagine dramatic skies and driving snow to get a better picture of what launching in winter would be like.

We visited pad 3 out of curiosity only. Pad 3 is a tower for launching Aerobee rockets. 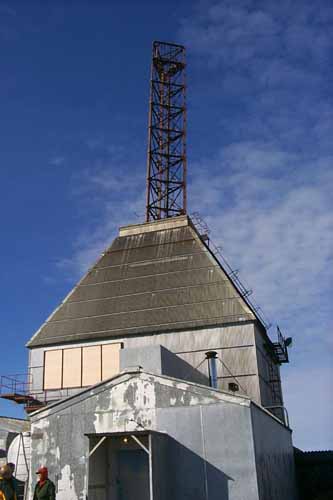 This sign in the entryway tells it all. What a sight this range must have been in its heyday with three pads and hundreds of Black Brant and Aerobee rockets of every type launching from here. Just last year, a Black Brant 9 was launched from this tower.

The inside of the tower was quite dark so these pictures are unfortunately a bit grainy. It's hard to capture the size of the huge 220 foot launch tower.

As you can see from the base, this tower turned in its pit and could change angles as well. 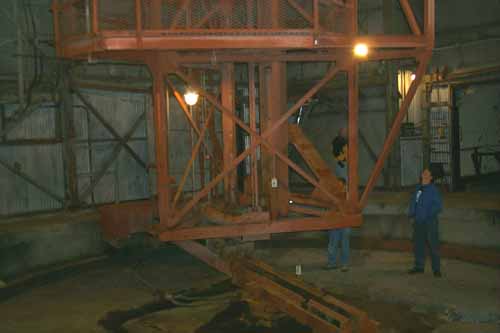 Pad 7 shares the preparation area with pad 1 and is located just to the left of it from the block house. We toured the inside of this pad as well, but it was too dark for pictures. At any rate, from the outside you can see that this one is yet another shape. This is a rail like pad 1, but with a vertical orientation like pad 3. 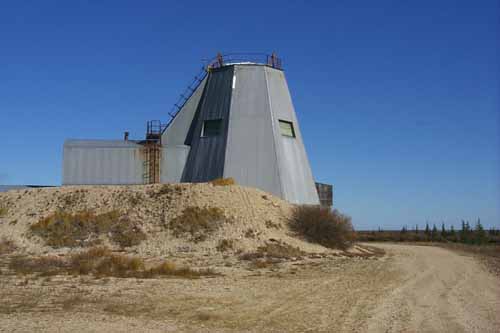 The scenery around Churchill (located on the northwest end of Hudson Bay) is desolate and beautiful. Below is a view from over Hudson Bay. 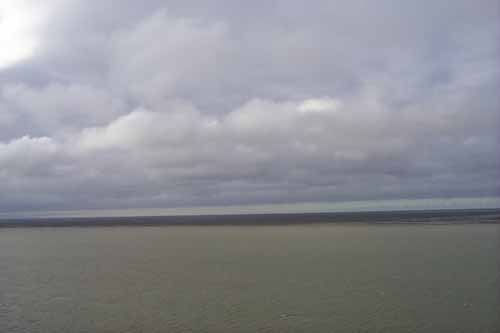 Here is a view from a helicopter of the tundra "marshes" at the edge of the bay. 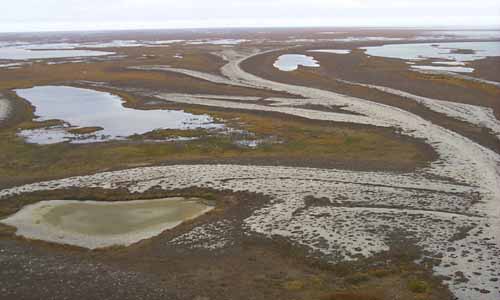 Here is a typical view the range, taken from the roof of the Northern Studies Center (the old operations building). 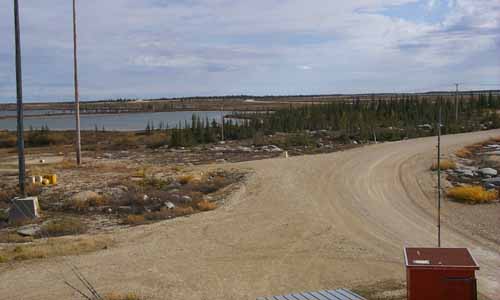 And finally a good picture of Tom Tessier, Tom Rouse and Jack Ireland. At the bottom you can see Dave Hall's boots and John Coker is behind the camera. 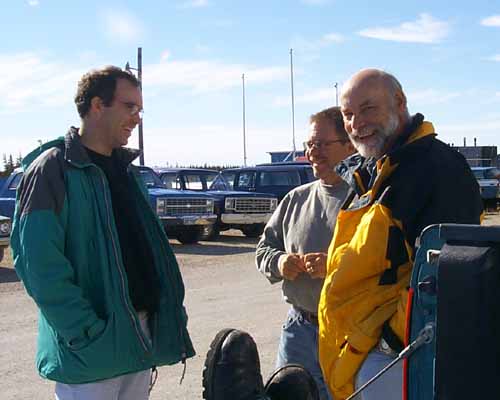 Dave Hall and I also took a helicopter tour, when I got the aereal photographs. We saw polar bears and other arctic animals and scenery.