I was attracted to the "hybrid ready" ads on the Public Missiles Ltd. Aurora kit. And, I wanted to try dual deployment, so I purchased it and the CPR-2000 retro-fit kit. (If you don't know what hybrids are, check out the Hypertek Hybrid info.)

In addition to a nice hybrid-based dual-deployment rocket, this combination also produced a neat quick ejection system adapter to allow use of hybrid motors in rockets built for traditional delay ejection. This is such a cool idea, I think P.M.L. should kit it separately. 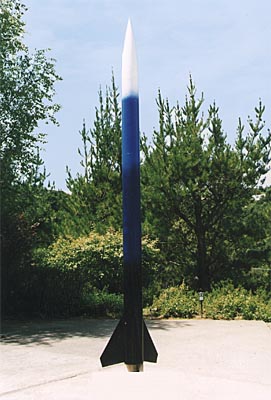 On June 14, at the annual ROC-stock launch in Lucerne, California hosted by the Rocketry Organization of California (ROC), I tried to launch the Aurora for the first time. This was my first launch with a hybrid motor and my first actual use of an altimeter for dual deployment. The launch was a disaster.

We never figured out what went wrong. The best guess was a problem with the hybrid ground equipment. The rocket appeared to take off normally, flew to about 50 feet, then ran out of steam and fell to the ground. The fall broke the brittle PML body tubing in many places and broke the CPR-2000 bay at the screw joint. 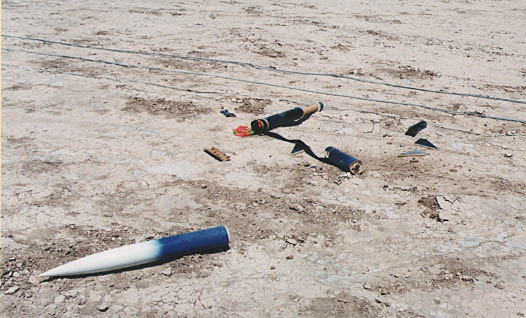 The instructions for this kit were brief (one page, one side), but I didn't use them anyway because they were superseded by the detailed instructions with the CPR-2000 retro-fit kit. The CPR-2000 was a neat idea, but it has some flaws which will prevent me from using it again.

The screw-together part is made of somewhat brittle plastic, which broke when my rocket was blown over by the wind onto dirt (nothing else was damaged). I was able to glue it back together and fly the next day. Also, the design prevents use of an external power switch. The bay is designed to exactly fit the Adept ALTS25; in fact, it uses the ALTS25 circuit board as the main structural component. Below you can see where the screw part broke (luckily the altimeter was recoverable). 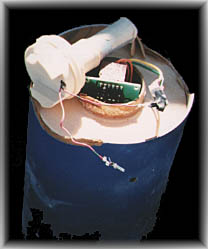 The neat thing was that the original ejection system for the Aurora is actually not really part of the rocket, but just an altimeter bay fitted for the Robbie's Rockets Loadable Ejection System (L.E.S.). Since I was replacing this with the dual-deployment CPR-2000, I didn't use the orignal bay at all. The original bay just fits over the top of a hybrid motor and replaces it in both function and position! This means you can use it and a hybrid in a rocket built for traditional delay-based ejection from a reloadable A.P. motor. I plan to adapt my Praying Mantis for Hybrid power, just by drilling two holes!

This idea is so cool, P.M.L. should kit it by itself. For the benefit of others who would like to build it, the instructions are reproduced below (or see the original instruction card). Note that the housing tube needs to fit over the N2O cannister and inside a standard 54mm motor mount tube. I don't know where this can be found. Mine fits tightly in the P.M.L. motor mount tubing.