The Rocketman Enterprises Praying Mantis kit was another neat-looking high power rocket. (I actually built this one because the Big Kahuna kit I'd purchased came with no instructions!)

On May 9th at the monthly ROC launch, I launched the Praying Mantis on its maiden flight for my Tripoli level 2 certification. The rocket put in a spectacular flight, earning my the certification.

On June 13, at the annual ROC-stock launch in Lucerne, California hosted by the Rocketry Organization of California (ROC), the Praying Mantis flew for the second time. It was recovered with no damage after a spectacular flight on a K550. The next day, I decided to fly it on a K1100 (twice the average impulse of the prior flight). The results were spectacular, but in the wrong way. The rocket moved too fast to follow with the camera and shredded shortly after launch.

I needed help finding Praying Mantis pieces, or should I say fragments... 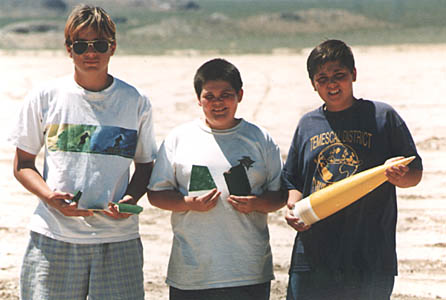 The instructions were complete and detailed enough, with lots of illustrations. As Ky Michaelson of Rocketman told me: "It goes together like any other high power kit."