Some members of AERO-PAC, organized by Tom Rouse, worked with Professor Bob Twiggs of Stanford to build rockets to launch student satellites from amateur rockets at the Black Rock Desert. For more information about the program, see the ARLISS web site.

The new rockets would be built using the same design as the larger ones, but based on 3" I.D. airframe tubing. In order to achieve the same interchangeability between ARLISS-K rockets we have between ARLISS-M rockets, the requirements are:

I drew a plan (PDF) showing the major components and dimensions for required parts. This should be used as the starting point for the design of any ARLISS-K rocket. William Walby also made a RockSim file for his ARLISS-K design.

Some things are not part of the requirements as people have suggested different configurations:

For reference, the sequence of events in an ARLISS flight are:

I decided to build my rocket using standard parts and make it as simple as possible. I followed the requirements diagram as the plan, defining the forward airframe length as 42" and the aft airframe length as 22". Using an 8" long electronics bay, this leaves 12" of recovery space for the booster and sustainer parachutes.

Keeping a rocket simple is always a challenge, but I resolved to:

This rocket should be easy to duplicate and could even be made into a kit since it is a simple design with all standard parts. 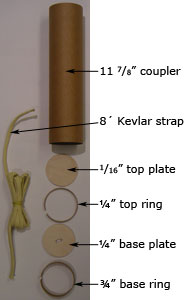 On the left you can see a diagram of the components of each carrier. Note that they are built just like the 6" carriers, except that instead of using a U-bolt at the bottom, the Kevlar®* strap goes through the bottom plate and is bonded to it and the top plate inside.

The two rings are coupler tubing cut to ¼" and ¾" lengths with a section cut out to allow them to fit inside a coupler.

The two plates are 1/16" and ¼" plywood, cut to fit inside a coupler. Note that there is no hole in the top plate and the bottom plate has an elongated hole for the ½" Kevlar® strap to pass through.

I decided to build six carriers. That should be way more than enough for this year, but somehow we never have enough carriers to go around.

* KEVLAR® is a trademark of E.I. du Pont de Nemours and Company.