Public Missiles Limited recently introduced a new type of tubing to replace their traditional paper phenolic tubing. They call this the "Quantum Tube" and it is some sort of plastic, looking very much like PVC. I thought this was great because P.M.L. phenolic tubing is famous for its brittleness.

I wanted to check out this tubing for myself, so I purchased the Black Brant VB kit (38mm) which is now made using the new Quantum Tube. Of course, the Black Brants are perennial favorites to model and I'd only done one so far (the Estes kit). Documentation on the prototype can be found in Rockets of the World.

Things were so rushed preparing for Balls 009, that I didn't take any pictures of this rocket before going out to the launch! But the good part is that Black Rock scenery is always good for rocket pictures. 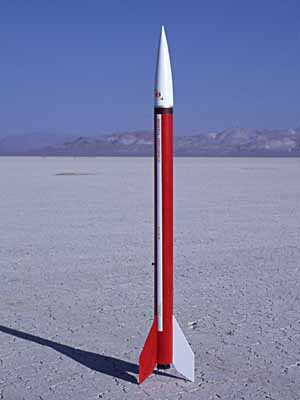 On Sunday, I flew this rocket for the first time. To test the strength of the new Quantum Tube, especially how well it bonds to G-10 and plywood, I decided to fly the rocket in a J570. Now this is way too much motor for this rocket, but since there was no wind at all in the morning, I decided to go for it.

The rocket took off so fast I missed it with the first shot. The flight appeared to be fine until at about 1000 feet the rocket shredded. Luckily, I got a picture of the neat loop it made.

The J570 is probably too much motor for this to have been a fair test, but I would still be concerned with the bonding strength of epoxy to the plastic. Roughing up the surface with sandpaper helps, but I still think a substance which epoxy can wick into is superior.

The kit is a standard P.M.L. design with G-10 fins and a piston ejection system. Interestingly, the Quantum Tube is only used for the main body tube--the M.M.T. is a 38mm phenolic tube.

The new Quantum Tube has some nice attributes, particularly the lack of spiral grooves. However, I had doubts about how well epoxy would stick to the plastic. I roughed up all bonding surfaces with 60 grit sandpaper for the epoxy and the outside of the tube with 100 grit for the primer. The kit went together easily and was familiar.

The Quantum Tube seems to have a stress built into it which makes it curl inwards at longitudinal cuts. The fin slot edges had a tendency to curl in and it took careful preparation to avoid bonding the fins so that the tube stayed in this out-of-round shape.