Loc/Precision just came out with a V2 kit in two sizes. I bought the smaller one at the April LUNAR launch. Apparently, I got one of the first few produced.

I like sport-scale rockets and hadn't built anything like a V2 before, so this was great timing.

This rocket flew for the first time on an I357, although I had my first burn-by of the Aerotech delay sleeve. The ejection charge went off shortly after the motor burned out. (I was told I hadn't used enough grease.) At least the rocket was recovered in flyable shape although the inside was blackened.

The Loc/Precision kit had less detailed instructions and usual (it's obvious this kit is brand new). But, as I've come to find, high-power rockets pretty much all go together the same way.

I decided to paint my rocket in the familiar black and yellow pattern of V-2 number 3 (taken from Rockets of the World and colorized). I had a hard time getting the paint to stick to the blow molded nose cone. Even with washing the nose with soap and water, then with alcohol, the primer still wouldn't stick. I had to re-paint several areas where the masking tape (Scotch magic tape) pulled the paint and primer off right down to the plastic nose cone! It turned out OK from a distance (or in a low resolution photograph), though. 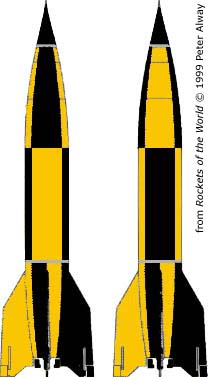 Also see the actual photograph below. 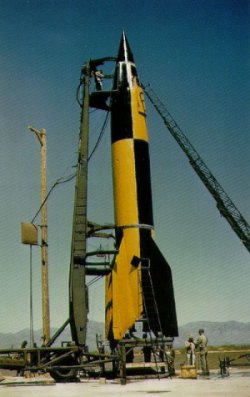 The V2 was an unmanned, guided, ballistic missile. It was guided by an advanced gyroscopic guidance system that sent signals to aerodynamic steering tabs on the fins. It was generally inaccurate due to errors in aligning the rocket with it's target, premature shut-off of the motor and inconsistencies in electric current in the guidance system. It was propelled by a hydrogen peroxide-methanol motor that generated 55,000 lbs of thrust. The motor typically burned for 60 seconds, pushing the rocket to around 4,400 ft/second. It rose to an altitude of 52 miles and had a range of 200 - 225 miles. The V2 carried a high explosive warhead weighing 2,000 lbs (1 ton) that was capable of flattening a large building. It was first fired operationally on Sept 7, 1944 against London, primarily as a propaganda exercise.

It's real claim to fame was as the progenitor of the rocket race that developed during the Cold War, and ultimately put men on the moon and probes that have left our solar system. In 1945, the U.S. managed to capture and ship home parts for 100 German V2 missiles, while almost all the best of the German engineers surrendered to the US Army and moved to America. Many V2s were launched from 1946 through 1952, mostly carrying scientific experiments, including the upper atmosphere research which discovered the ozone layer.

(Borrowed from Miles Constable's V2 page and Rockets of the World by Peter Alway, available from ARA Press.)