There is much conventional wisdom about how strong adhesives are and which ones are strongest for rocketry use, but little hard evidence. That two-part adhesives such as epoxies are the best is pretty unequivocal, at least for high-power rocketry. But, is hobby shop epoxy strong enough, or do you need to go to "professional" epoxy systems? What techniques produce the strongest bonds?

It has been pointed out that epoxy systems (among many other adhesive products) are rated using a standard system. ASTM International test products submitted by manufacturers using standardized procedures. These results are available from the manufacturers of the products tested. It is important to point out that the testing described here is in no way an attempt to reproduce standardized testing. Our goal is to test typical HPR materials and adhesives using typical best practices for the hobby.

Two tests were perfomed, both "lap-shear" tests of strips bonded together; test 1 with G-10 and (unreinforced) plywood and test 2 with fiberglass-reinforced plywood. To cut to the chase, here are the five conclusions which I drew from these two tests:

The rest of this page describes the test goals and process and presents the full results.

Well, it sounds like we need to do some real testing! Since I'm concentrating on high-power rockets, I am only considering epoxies. (I would encourage someone to do a model rocket version using lightweight materials.) I'm also going to use typical HPR materials such as plywood and G-10 phenolic.

This gives us four products to try:

This testing languished for a long time because I had no good way to accurately test the breaking strength of samples. Drake Damerau posted on R.M.R. about doing real testing and we managed to hook up. The actual testing was done by Drake using machinery at his job (Scranton Army Ammunition Plant).

That said, this is fundamentally hand work (as we do when building rockets), which results in variation between the samples. The standard deviations for the sample sets quantify that variation.

Most uses of epoxy are for general bonding so that's what we'll test. For the first test, I chose heavy-weight G-10 and 3/8" plywood as representative of high-power construction. This gives us two kinds of materials to try:

Note that no fillers were used with any epoxy. The Bob Smith and Aeropoxy ES6209 are naturally thicker than the laminating epoxies (West System and Aeropoxy PR2032). The ES6209 is so viscous that it's difficult to measure small quantities accurately.

The samples were then sent to Drake for testing in his machinery. (More information and raw results are available on his site.) 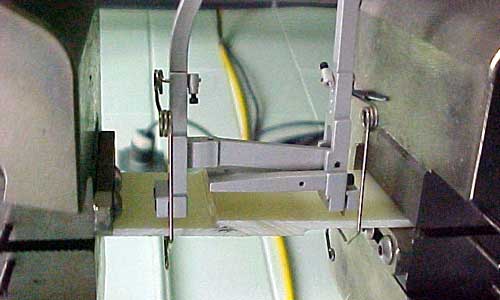 In the picture above, you can see the first G-10 sample in the test machine. The ends of the sample are pulled apart (stretched) until the joint breaks. The machine measures the maximum force (in pounds) applied before breaking, which is the measurement reported as Strength below.

Comments from Drake after testing:

"The primary mode of failure in the plywood tests was delamination of the wood. Some of the epoxies did penetrate deeper into the wood, but the test results hinged on the strength of the wood. In every case, they broke at the joint and they all delaminated at the joint surface (not the core).

"The G-10 results were quite different in that the epoxy appeared to dissolve the G-10 and re-solidify. The Bob Smith had very little ability to dissolve the material, while the other two seemed to be 'hotter' and dissolved the material considerably."

"I can't explain for sure the difference between the [Aeropoxy ES6209] samples and the other plywood samples. There seems to be less delaminating of the plywood and more shearing of the epoxy on these. Otherwise, they are the same. Unfortunately, the differences are generally too subtle to document with a photograph."

The table above summarizes the results in relative terms. The breaking force averages are divided by the lowest value in each category.

Here are some conclusions which arise from this test:

Of course, one must be careful not to over-generalize from one test. The actual test performed is a "lap-shear" test, which is only one of many types of stress which could be applied to an adhesive bond.

The poor performance of the plywood made me want to find out what difference it would make if the plywood had a layer of fiberglass cloth laminated to it. So, we did a small run in the lap-shear series with this third case.

One side of each blank was laminated with 6oz. fiberglass and vacuum bagged on. Then the fiberglass sides were bonded using the same technique as in the other lap-shear tests. One test was done with West System 105/206 for both lamination bond and the other was done with Aeropoxy PR2032 to laminate the fiberglass and ES6209 to bond the pieces. The laminations were allowed to completely cure and were then sanded at the overlap (as with the G-10 blanks).

The samples were cut into strips and tested in exactly the same was as the other sets of samples in this series.

I suspected that the fiberglass-reinforced blanks would be stronger than plain plywood blanks, but I didn't expect them to be twice as strong. Like the other plywood tests, the plywood failed before the joint, but in this case the fiberglass lamination dramatically increased the strength of the plywood.

Here are some conclusions which arise from this test:

Alert reader David Tam pointed out that these tests were all done at room temperature and the results may not be applicable at low temperatures.

Larry Capps pointed me to a piece of research on bonding wood products using epoxy. Those who are interested in more detail should read it for further info: Structurally Durable Epoxy Bonds to Aircraft Woods.

3M published a paper which is also very interesting. While it's focused on bonding metals, it does have some interesting discussion of the optimal configurations for epoxy joints.